No, you’re not manually testing software 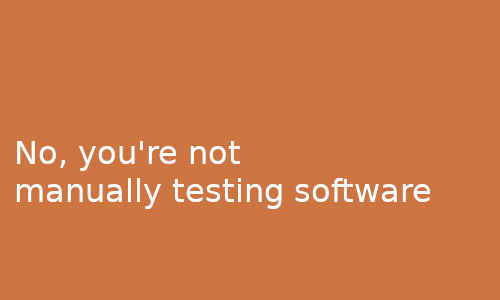 Manual software testers are clearly a thing. You just have to look at the job boards of companies to work that out.

But Manual software testing is not a thing.

There, I said it.

It’s long bothered me that there is this distinction between the two sides in the discipline of software testing. Almost as if one side is doing more than the other.

And while that may be true to some extent (designing and developing automated checks does take some new skills). Is there really enough to separate the two?

Take for example a couple of cars that are parked on the road.

If you were walking by and had no prior information about the cars. Would you know which one was a manual, and which one was an automatic? Would it even matter?

Probably not. They’re just a couple of cars to most people.

The “manual” prefix in peoples job titles. Seems to throw a lot of people off. Making it appear that they’re doing a separate job, compared to their “automated” counterparts.

But are they really? And what do these “automated” testers do that you don’t?

In reality, not a whole lot.

First I think it’s important to define what manual software testers and automated testers generally do.

This won’t be an extensive list of the abilities of both roles. But it will be a list of their general tasks which they engage in to perform software testing.

Using various tools at their disposal (such as spreadsheets, screen-recorders and such). They write, run, observe and validate the test results against the expected output using their experience of the software as a benchmark.

Using automated testing tools at their disposal (such as Selenium/API testing frameworks and such). They write, run, observe and validate the test results against the expected output using the requirements and specifications of the software as a benchmark.

The only thing that separates manual testers from automated ones is the tools that are used to get the job done.

So why the distinction in job titles

Which for a company. Is kind-of a no-brainer. Automated tests generally run faster, provide quicker feedback, along with a host of other advantages. But as with most things, there are also disadvantages (see a list here).

And as for automated software testers. They can look forward to usually getting paid more, having greater options for growth and the ability to transition quite easily into other roles if they wish.

My assumption is that companies want to attract people who can automate. And by putting “automated” in a job title. They are achieving that goal.

But that doesn’t generally happen in other job roles.

Someone who creates music using instruments isn’t generally perceived to be radically different from someone who uses electronic synthesizers or even classical instruments.

There may be a difference in the kind of music they make. And they might be referenced to slightly different to make the distinction easier for people to distinguish each type.

They are simply using different tools to achieve the same goal. Make music.

Someone sent me this tweet from Michael Bolton the other day. I think it sums up my feelings perfectly.

You are not a manual tester, unless you are testing manuals. You are a tester. You DO use tools. You may not be writing automated checks.

So in conclusion. I think it will be better for everyone if we didn’t refer to ourselves as manual/automated testers.

I think it causes unneeded confusion for people trying to get their first job as a tester.

It doesn’t matter how you do it. As long as you can test software using the tools that are made available to you.